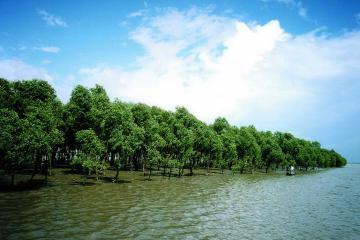 In 1971, after independence from Pakistan, in Bangladesh where human resource development was urgently needed, OISCA started accepting trainees to Japan. The enthusiasm of the Bangladesh trainees after returning from Japan to do their best for their homeland moved the hearts of OISCA members of Aichi Prefecture who then provided financial support, a group of former trainees established in 1981 a training center at Village Narashingpur, P.S. Savor District located in the suburbs of Dhaka. The activities in Bangladesh are divided into 3 projects: capacity building at the training center near Dhaka, mangrove reforestation and Children’s Forest Program (CFP).

About 40 years have already passed since the training program that they are continuously implementing, they have produced many alumni of trainees. The mangrove planting project, which has been underway in the Chittagong Division in the southeast, has created a long and large green corridor along the canal that serves as a green breakwater, serving as a preparation for natural disasters such as cyclones. In addition, from 2019, Mangroves have also begun to be planted in the western Khulna Division near the border with India.