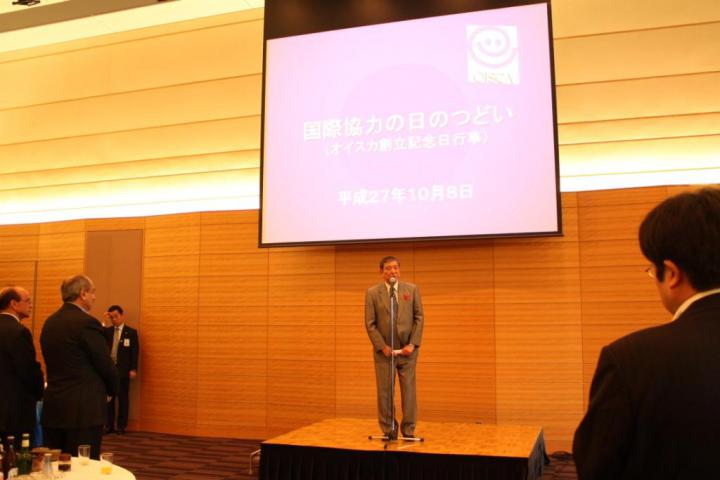 OISCA International organized a series of international events on October 7 and 8 in Tokyo. The 2015 International Board of Directors Meeting was held for one and a half days at the International Conference Room of the National Olympics Memorial Youth Center in Yoyogi. A total of 75 delegates from the 16 countries and areas where OISCA national chapters are located participated and discussed various agenda items.

In her key note speech, OISCA International President Dr. Yoshiko Nakano emphasized the need to further promote various projects in line with the Sustainable Development Goals (SDGs) adopted a couple of weeks ago by the United Nations. She also stated that the International Year of Soils (IYS) declared this year by the United Nations “has proved to be a favorable wind to us” since OISCA has been consistently promoting agricultural development through organic farming based on the principle: “NOT DIVORCED FROM SOILS” inherited from the founder of OISCA.

The morning session was devoted to the review and evaluation of OISC performance over the last year, and the report of the Finance Committee. Mr. Enrique Lim, 92 years old veteran of the Philippine Chapter, commenting on the OISCA achievements, highlighted the significance of planting more fruits bearing trees not only to tackle environmental problems but also to alleviate the problem of hunger and poverty, while Datuk Ibrahim bin Ahmad, OISCA Finance Committee Chairman and the Director-General of Majilis Amanah Rakyat (MARA) of Malaysia, suggested to promote halal food business to generate more income. The delegates approved the proposed 4 new chapters (Garut, West Java in Indonesia, and Orkkatteri, Nellipoyil and Narikkuni in South India).

In the afternoon, the participants took up two major agenda items: the 17th Asia Pacific Youth Forum (APYF) to be held in November this year in Calicut, Kerala, South India and the Children’s Forest Program (CFP). A number of constructive comments, questions and proposals were put forward on APYF, and it was agreed to set up a working team to elaborate and finalize the Draft Proposal for the 17th APYF prepared by the Secretariat. Regarding the challenges of CFP, various new ideas were proposed for further improving fund-raising activities and enhancing sustainability. In the morning session of the second day, the Board members unanimously adopted the revised Proposal for the 17th APYF. Then, each national chapter made a presentation on the current situation of the various activities.

The Meeting was concluded with closing remarks by Mr. Toshihiro Nakano, OISCA International Executive Vice President, in which he strongly encouraged the participants to further expand OISCA activities, particularly CFP to other parts of the world.

Following the Board of Directors’ Meeting, the foreign participants moved to the National Diet Building for a guided observation tour. Then, the international group attended an awarding ceremony for corporate and individual members who have been faithfully supporting OISCA activities for over 40 years which took place at the First Members’ Office Building of the House of Representatives. Four corporations (Sumitomo Chemical Co., Ltd., Takaraseika Co., Ltd., The Bank of Yokohama, Ltd., Saitamaken Shinkin Bank) and two individual members were presented a special award for their long support.

Later in the afternoon, OISCA organized a reception to commemorate Japan’s International Cooperation Day. In addition to the OISCA International Board of Directors, leaders of OISCA domestic chapters and branches, representatives of private companies and individuals supporting OISCA activities, foreign diplomats stationed in Japan including Ambassadors from (Maldives, Myanmar, Nepal, Philippines, and Palestine), attended the event.

Also, a number of prominent members of the “Association of Japanese Diet Members Supporting OISCA International Activities” graced the occasion. Representing the Association, Minister Shigeru Ishiba, in charge of Overcoming Population Decline and Vitalizing Local Economy in Japan and concurrently Minister of State for the National Strategic Special Zones, delivered a congratulatory speech. On the part of the diplomatic corps, H.E. Mr. Ahmed Khaleel, Ambassador of Maldives, took the floor and said, “Although OISCA is not currently carrying out any activity in Maldives, and the fact that I have been invited to the functions indicates OISCA interest in our country. I do strongly hope that OISCA will start its activities in our country in a very near future”. 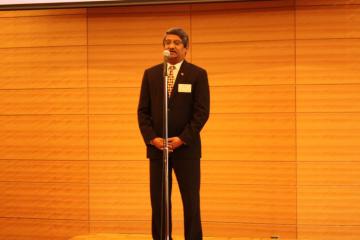 H.E. Mr. Ahmed Khaleel, Ambassador of Maldives during the ceremony 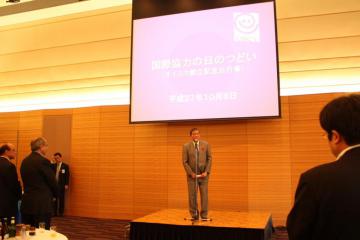 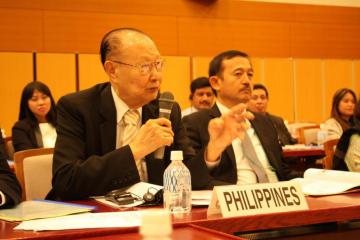 Mr. Enrique Lim of OISCA Philippines during the Board of Directors Meeting in Tokyo. 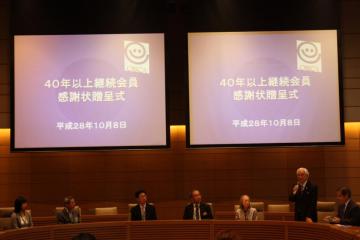 Mr. Toshihiro Nakano expressing his gratitude to the supporters of OISCA for more than 40 years. 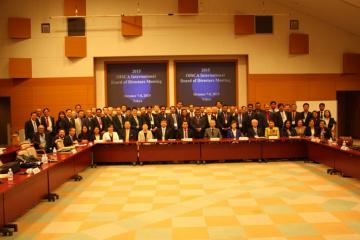