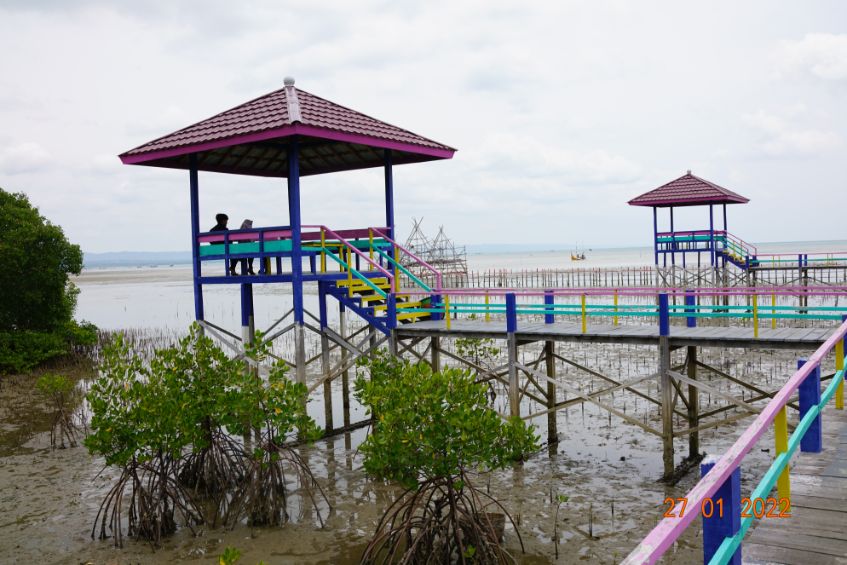 OISCA operates in Madura Island, Indonesia. Pulau Madura, off Java, at the north-eastern tip of the main island, is about 160 kilometers from east to west and about 38 kilometers south to north. The highest point is at the mountain, Gunung Payudan, only 469 meters high.

Approximately 80 % of Madura Island is under cultivation. However, the soil is generally infertile. Soils derived from their parent rock limestone and sandstone have low water retention capacity. Residents often suffer from the water scarcity problem. The primary products include rice, tobacco, corn, cattle, and salt.

OISCA carries out tree planting and livelihood development projects and the Children’s Forest Program (CFP). OISCA representatives visited the project sites on 26 and 27 January 2022 for monitoring and evaluation.

Twenty schools participating in the CFP

The CFP has 20 participating schools, which actively participate in tree planting, school gardening, environmental study, and practice. As CFP schools had had water shortage problems and want of washstands, OISCA implemented a project granted by National Land Afforestation Promotion Organization, Japan, to install rainwater harvesting and water utilization systems at CFP participating schools. The donation was timely because the pandemic that has devastatingly spread since 2020 strictly enforced hand washing.

Pangarangan I Primary School at Jl. Kartini 77, Sumenep is one of the CFP participating schools. They have planted trees in the schoolyard. It received the donation of a rainwater harvesting system with hand-washing stands. As the yard is full of trees, now they plan to make compost at the school. Teachers and schoolchildren will use it in planting trees at their home yards and vacant lots near their homes. A CFP coordinator, Mr. Sumaryanto, is an OISCA agricultural training graduate; he will teach the school staff how to make compost with effective microorganisms.

Pangarangan I Primary School participated in an international poster contest held by the OISCA Headquarters two years ago. One of their schoolgirls, Ms. Afiqah Bashariyah, won 2nd Place in the 7-9-year-old category. Responding to a question about what message she wanted to carry on the poster, she answered, “let’s protect life in the water.”

OISCA mangrove planting projects operate on the southern coast of the Island with financial assistance from Tokio Marine Nichido, a major insurance company based in Tokyo. At each project site, a local community group carries out the planting.

The planting group members are in high morale. Yet, the project occasionally pushes them into laborious tasks. Strong west winds blow to bring garbage on high tides. The trash hangs on to mangroves and destroys small saplings. Despite such difficulty, the groups ensure a 70 % survival rate as they continue replanting to make forests.

Mr. Slaman, an enthusiastic village entrepreneur, is the leader of a village forest community group, LMDH Sabuk Hijau, under the village chief in Lembung. His group promotes bee culture to develop a livelihood. This activity is also a conservation project funded by Tokio Marine Nichido. His initiative is still rudimentary, but he ambitiously plans to expand it as mangroves planted by his group provide a fertile ground for honey gathering. They keep ten bee boxes, collecting about 1.2 kg of honey every three months during this experimental period. They can get propolis along with nectar. Honeybees produce this beeswax by mixing their saliva with wax that they have collected. Propolis has antibacterial and antivirus effects. Many people use it as alternative medicine.

LMDH Sabuk Hijau has another aspiring plan to promote eco-tourism to develop a livelihood involving more young villagers. The Pamekasan Tourism Office constructed a footpath, which passes through the mangrove forest. They could make the most of this facility to develop eco-tourism. Mr. Slaman believes that the new form of livelihood will help villagers become more aware of the benefits of mangroves.

Mr. Sumaryanto is a long-standing coordinator for OISCA projects in Madura. He trained at OISCA Karanganyar Training Center. Years after his training, his family and he moved to Madura because his wife was assigned there as a midwife; he joined OISCA to help implement mangrove projects and the Children’s Forest Program.

While many graduates who completed courses at OISCA Training Centers in Japan work as part of the project implementing team, Mr. Sumaryanto and his colleagues did not participate in advanced training held in Japan. They, however, keenly felt the need to have OISCA activities in their hometowns. They work with a strong sense of ownership. They play significant roles in bridging between the OISCA representative office and local activities, including mangrove planting and CFP.