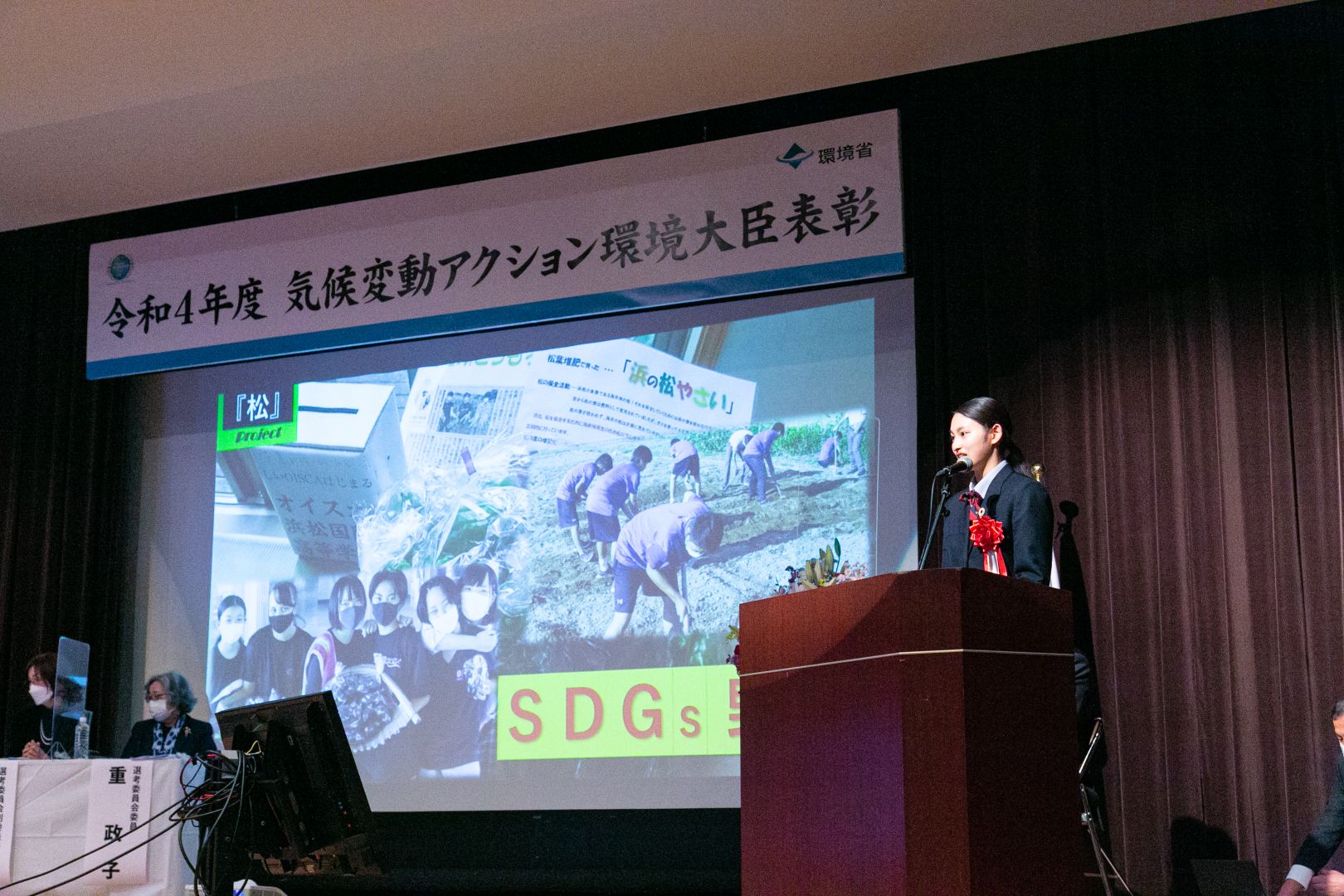 The Minister of the Environment and the Minister for the Cabinet Office simultaneously awarded OISCA Hamamatsu Kokusai High School, Hamamatsu, Japan, 2022 Special Awards for its longstanding and meritorious SDGs Action. The two Agencies recognized that while envisioning low-carbon economies, the school’s local action has meaningfully dealt with the environmental degradation issues comprehensively by having the participation of young volunteers (OISCA school students and graduates, and young people from other schools). Their action involves civil society, governments, and the private sector in information exchanges, achieving synergetic effects.

Since 2001, OISCA Hamamatsu Kokusai High School in Hamamatsu has worked to clean beaches near the school to protect sea turtles. Green sea turtles – Chelonia mydas, designated as an endangered species, lay eggs on beaches almost worldwide. They include Indonesia, Australia, Oman, Guinea-Bissau, Costa Rica, Comoros, Saudi Arabia, Suriname, Seychelles, Brazil, Malaysia, Myanmar, Ascension Island, Galapagos, and Florida, which provide primary egg-laying grounds. Beaches near OISCA High School become one of their egg-laying grounds. Also, Loggerhead turtles – Caretta caretta, have found the beaches in Hamamatsu and neighboring cities on the Pacific Ocean as their egg-laying grounds for decades. Loggerhead Turtles are also among the endangered species, though the threat of extinction is less severe.

Having learned about the critical situation of the species on the verge of extinction, the students wanted to invite more turtles onto the well-kept beaches and maritime forests to reproduce. They also desired to help rebuild seashore swamps ecosystems to protect endangered species – the Japanese tiger beetle, Chaetodera laetescripta, indigenous to coastal sandy beaches. They decided to start something they could do right away – beach cleaning; at one time, they made one into a cleaning contest participated in by volunteers, including students, graduates, and friends of OISCA School and other schools. They competed by the amount of garbage they collected. The volunteers collected a sizeable amount of fallen leaves and mown grasses under trees, made it into compost to use in their school gardens, growing vegetables to donate to people, including senior citizens who live alone.

The OISCA students learned about various environmental issues near their homes. They researched erosion on the coastline, damage to pine trees on seashores by pine weevils, and biodiversity loss. Their activities developed into diversified types and inclusive of a wide array of people while they learned how environmental degradation worsens and how to remedy them.

Repeater participants from OISCA, who on average were more than 100, make every effort to involve other schools, strengthen friendships and understanding about SDGs, and promote volunteer work to clean the environment and protect endangered species. The students hope to protect the environment more in their hometown and to make their homes more resilient by enriching forests. Some students desire to use their experience after graduation in activities for Eco-DRR – Ecological Disaster Risk Reduction.