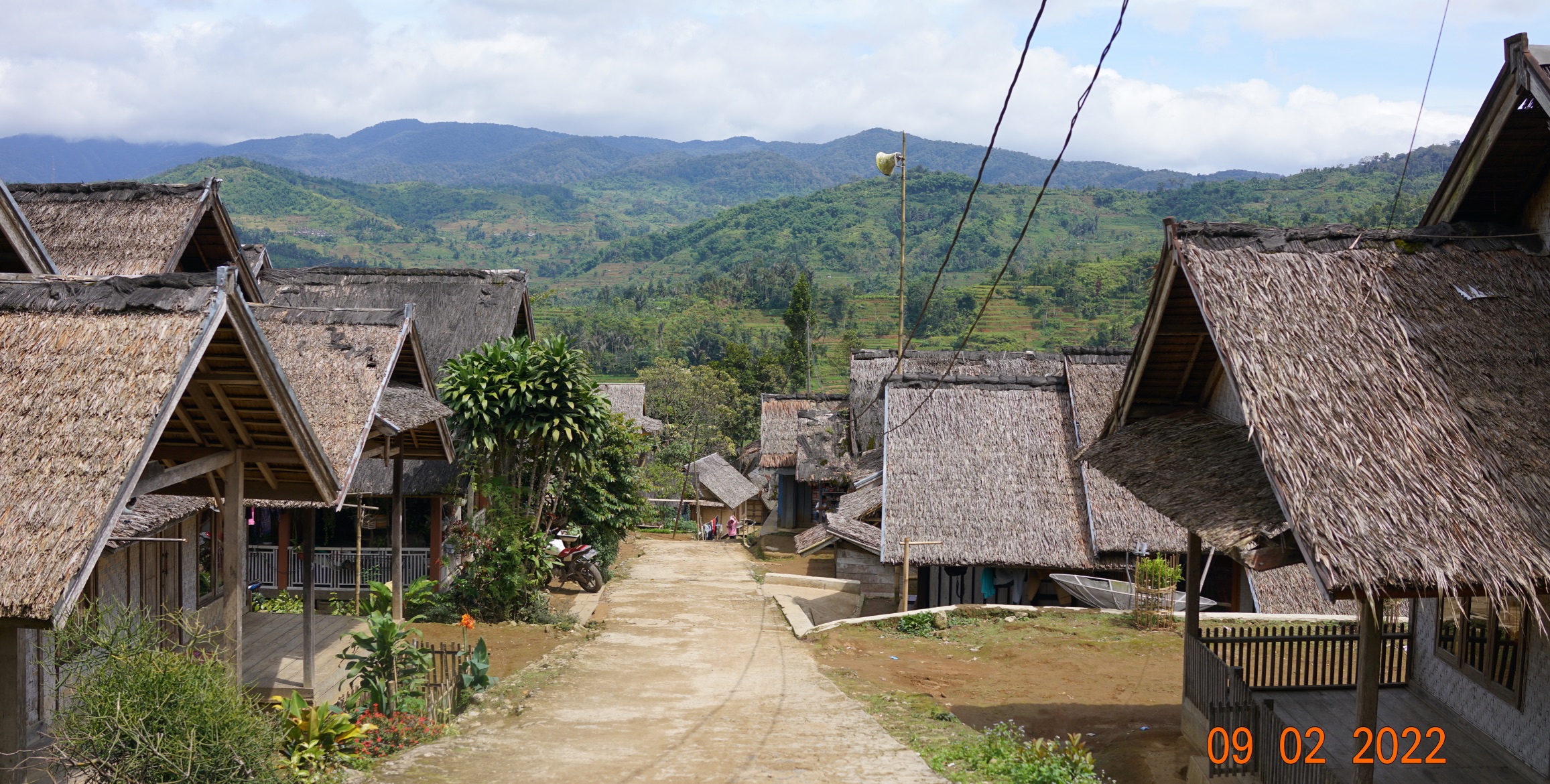 OISCA Japan started implementing a three-year project granted by the Japanese government in March 2020. Its title is “Project to improve infrastructure, living environment and livelihood for the marginalized community of Kasepuhan Ciptagelar.” The Project site is at Sirnaresmi Village, Cisolok Subdistrict, Sukabumi Regency, West Java.

Ciptagelar is a traditional community called Kasepuhan situated in a mountainous area, Sukabumi Regency, West Java. The community has its head, Abah, or traditional leader. Abah’s leadership has helped the people retain their traditional lifestyle, and unique culture for generations. They used to have much less contact with the outer world but have gradually opened in recent decades. Yet, the members have fewer opportunities to enjoy social services even today. Geographical remoteness and poor transportation infrastructure limit their market access for their agricultural products. The number of visitors has swollen, attracted to the beauty of nature and its unique traditions. However, they have brought about pollution with plastic and other wastes.

The Aim of the Project:
Against such a backdrop, this project aims to improve the environment and develop livelihoods. Its sub-projects include water canal repairs, public restrooms construction, waste management, and support of the production and marketing of agricultural products, livestock, and freshwater fish culture development while respecting and preserving its traditional culture.

Kasepuhan Ciptagelar
The people who live in Ciptagelar Village are called the kasepuhan people. Kasepuhan comprises SEPUH with the prefix KA and the suffix AN. In Sundanese, it means “old-fashioned” or “old” in Indonesian. Kasepuhan means the elders’ residence. The term also shows the ‘leadership system’ model of a community or society firmly guided by the customs or habits of the parents.

Farmers Elated with Increased Production
The three-year project has completed the halfway task by January 2022 (due to the Covid-19, the implementation is slower than scheduled). Three hundred households selected as direct beneficiaries learned improved techniques in agriculture. Given a traditional farming method practiced for years, they had not depended on chemicals, and their land was not fertile enough without fertilizers. They have learned to make and use organic fertilizers. Besides, the project staff also taught them how to raise vegetable seedlings and transplant them, use natural insect repellents and vinyl mulching, etc. They were able to enhance their productivity considerably. The leader of a group, Mr. Sukuri (the right in the photo), said, “I am thrilled because the quantity of our products has increased. Thanks to the guidance in the project, we harvested the first crops and immediately planted the next crops. We used them for in-house consumption and marketed the rest. Before the project, we didn’t use fertilizer but now apply organic fertilizers and use natural insect repellents when attacked by insects. Formerly we practiced only direct planting, but now seedlings grow in our nursery beds to transplant into main fields. That way, all vegetables grow well.”

The Project has a roster of 300 beneficiaries, households’ male leaders, divided into ten groups. Each group has its group farm, and the members have cooperated in cultivating vegetables such as cabbage, chili, corn, cauliflower, broccoli, leek, peas, etc. But sometimes village events require them to serve public work; their family members work for them for the group farms. The two girls shown in the photo flanking Mr. Sukuri came to take care of their vegetables, representing their fathers, on 9 February 2022. Emulating the Project beneficiaries, other farmers also started to adopt the same method to cultivate vegetables.

The villagers obtained material assistance such as sheep, ducks, juvenile fish for livestock, and fish culture development. The Project also helped them plant grasses on the edges of terraced paddy fields. The grasses are nutritious as feed for domestic animals. They also started agroforestry, planting citrus, clove, avocado saplings and other trees, which will produce fruits in a couple of years.

The Project introduced a “Garbage Bank,” which receives garbage picked up by villagers, including children. The “Bank” processes the waste by shattering plastic trash and making the kitchen and perishable garbage into compost. Shattered plastics are sellable at higher prices than more cumbersome plastic wastes. Villagers bring to the Bank garbage to get credits. They later claim the payments with those credits.

The project completed repairs of water canals, which now constantly provide 88 % of the people the water for their living. It is an increase from the previous 55 %. A sub-project provided small hydropower that generates about 7 KW electricity, which provides 105 households with a stable supply of electricity.

They will increase rice production for sure. Additional eighty-one hectares of rice fields receive irrigation water year-round because of the repairs of the canals. The custom in Kasepuhan Ciptagelar prohibits the selling of rice. The reason is that rice is life; it is a staple food, so selling rice means selling life and results in the rice quickly disappearing. They always ensure self-sufficiency in the staple food. Water flows in streams or gushes out from mountainsides. The irrigation canals carry ample water to rice fields and houses and enable increased rice production and the cultivation of secondary crops.