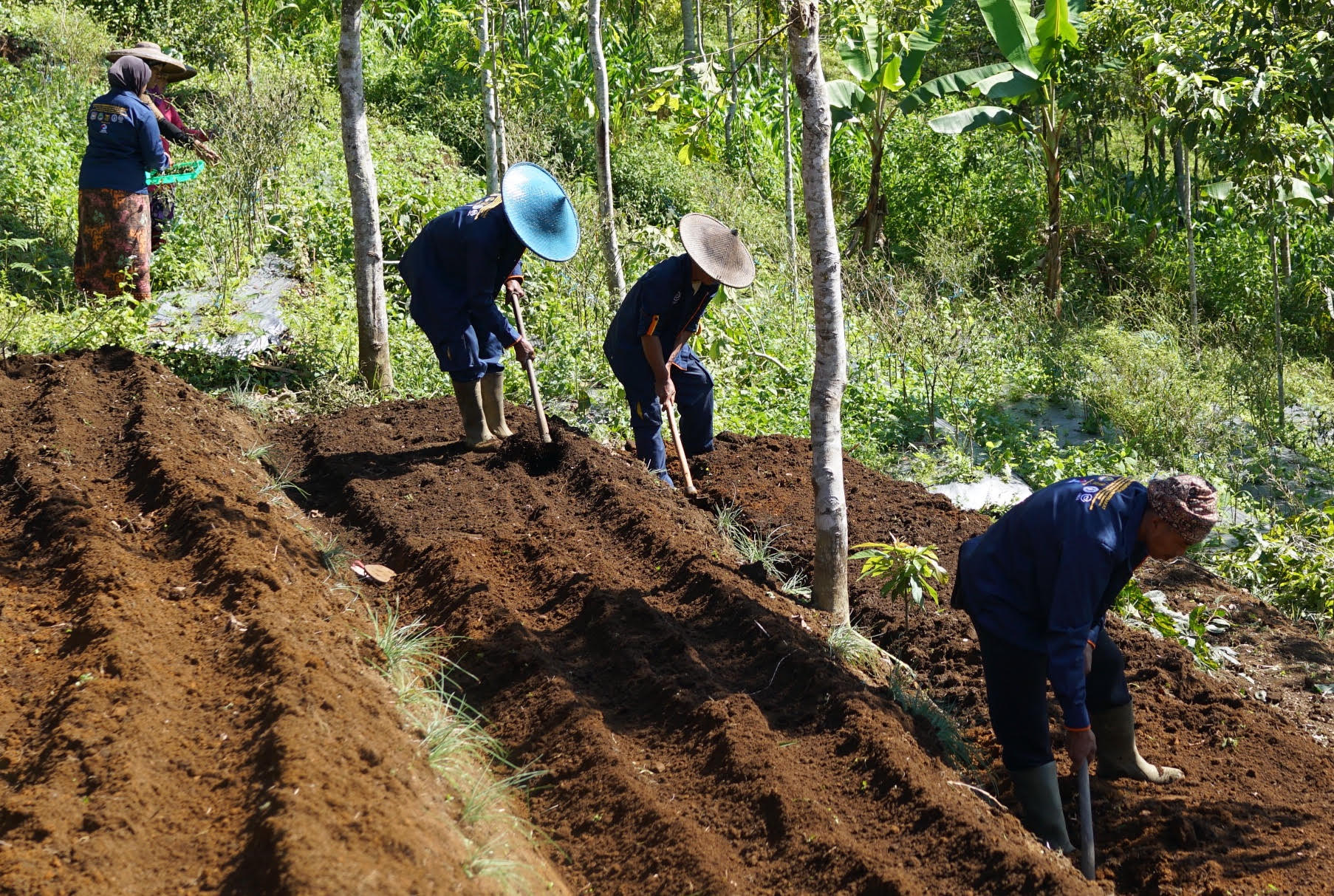 OISCA started carrying out a Grant Assistance for Japanese NGO Project (N-ren Project) granted by the Foreign Ministry of Japan in 2020. The objective is to improve infrastructures, living environment, and livelihood for a marginalized community of Kasepuhan Ciptagelar (project site: Sirnaresmi Village, Cisolok Subdistrict, Sukabumi Regency, West Java Province). It comes near the completion of its second-year phase in June 2022. This article describes the project’s achievements at the end of the second year and a unique community life where people have more dominant values that precede economic efficiency.

In Sukabumi and Bogor Districts, West Java Province, and Lebak District, Banten Province, Indonesia, a few hundred communities called Kasepuhan live life rigidly preserving their spiritual traditions. In these villages, their ancestral customs precede their economic efficiency. Their worldview much differs from those of the ordinary people typical in the current civilization. The term, Kasepuhan, comes from the Sundanese word SEPUH with the prefix ka and the suffix an. SEPUH means “old.” The spiritual culture inherited from the ancestors sustains and empowers the Kasepuhan leadership.

Kasepuhan people belong to the Sundanese ethnicity. Sundanese, immigrants of Malay extraction, mostly live in West Java. According to the census in 1990, their population was 27 million. An epitaph describes a Sundanese nation on Hinduism in West Java around the 4th century. The Sundanese Kingdom emerged in the 16th century on the north coast of West Java and confronted the Dutch East India Company. Their staple food is traditionally rice. The colonists developed monoculture farms to cultivate tea and rubber. Islamic culture has continuously influenced them to form a mixture of Islam and indigenous spiritual cultures. Some of their noticeable indigenous spiritual cultures include a rite of passage, a rite of community members eating food offered to God, and a religious observance of rice culture. Selametan, a ceremony to express deep appreciation to God, is practiced in Kasepuhan villages.

N-ren Project’s intervention for livelihoods development
OISCA started carrying out a project granted by the Japanese Government in 2020, aiming primarily to help Kasepuhan Ciptagelar construct infrastructures, develop livelihoods, and raise their productivity – mostly in vegetable culture on terraces, fish culture, sheep raising, and duck farming. In a society with less communication and interaction with the outside, they had had less opportunity to learn skills or get an education. OISCA provided skills to raise productivity and diversify their crops. That has helped them earn considerably increased incomes. Their economy is still minimal by comparison with the outside world, but they can get enough food and enjoy their culture and fulfilling lifestyles. Mountain forests embrace the community at a high altitude, and their roads are narrow, unpaved, and extremely steep. Out of about 730 families, only seven persons have cars. Many use motorcycles for transportation.

The community has a leader called Abah, assisted by his aides – a group of elders administering the community based on their traditional spiritual culture. Out of a few hundred Kasepuhan, a little more than a hundred Kasepuhan have Abah as spiritual leaders. Abah receives messages from his ancestors. Abah appoints his successor, according to a divine oracle, usually a boy child, as he retires. In Ciptagelar, the current Abah is the 9th in the lineage. Specifically, the 5th Abah provides notable messages.

The customs inherited from ancestors prevail and impose several prohibitions. They consider rice sacred as it possesses the power of life. The community bans selling rice and pumpkins as commodities. The cardinal principle is their survival even in a simple life, preserving their culture, and living in harmony with nature. The people under the spiritual leadership conserve forests, strictly preventing unmanaged exploitation.

The custom makes sure that they always keep principal food items, so nobody would suffer from starvation, though they paid less attention to other foods to maintain their healthy life. They lacked sources to earn enough income to get funds to repair their basic infrastructures, etc., before the N-ren Project’s intervention.

However, their traditional living in harmony with nature appears deeply embedded in their mentality. After harvesting rice, farmers hang it on paddy sheaf racks made of bamboo to dry. But no sparrows give bird damage to the rice. Many sparrows live in rich forests, but they are scattered. They have eaten rice in fields as much as they like, and some paddies still have unharvested standing rice, which is for sparrows. In practicing organic farming, placid farmers never mind if insects moderately eat their leafy vegetables.

Before the OISCA project started in 2020, farmers in the village were unaware of how to raise productivity in vegetable cultivation. Many young people went out of their hamlets to engage in construction work for wages, or some challenged a gold mining venture. They needed to earn income to buy vegetables from outside the community. Their productivity in vegetable culture was extremely low. However, they were skilled in rice culture; Abah prohibits using agricultural machinery for rice culture. Even for vegetable culture, they have no way of depending on machines; even small ones are not suitable for their tiny plots on terraces. Depending always on manual labor, they are traditionally hard-working people.

Guided by OISCA instructors, the farmers make and use organic fertilizers. They now believe in organic farming, which is sustainable agriculture, maintaining soil fertility, and having fewer troubles with their vegetables infected by diseases and insects. They make composts and carry cumbersome bags of compost on their backs from their sheds to fields walking on narrow ridges of plots, sometimes on ascending paths. The project has enabled most beneficiary farmers to increase incomes by 2-3 times. That astounding result is attributable primarily to their hard-working habit.

Without introducing machines to their farms, a little more aggressive farmers employ neighbors for their manual labor in vegetable cultivation on a bigger scale. The employed people, making the most of their spare time, earn extra incomes by their timework. One of the farmers named Mr. Rumanta, 59 years old, said, “I am working to provide my manual labor; appreciate the additional incomes. I never mind the hard work because I am pretty used to the labor; I enjoy my calm life living with my four sons in the community surrounded by rich nature that provide me a feast from time to time. I sometimes climb sugar palm trees to get sugar juice.”

Mr. Handa, one of the project beneficiaries, started home gardening making the most of the space on his small building’s roof. He grows tomatoes, leek, eggplant, and others. Handa also raises vegetable seedlings. A housetop is a convenient place as he looks after them every morning. Some more people now emulate him. They are accustomed to using small plots on terraces. Technical guidance has provided them a scope to achieve unexpected results.