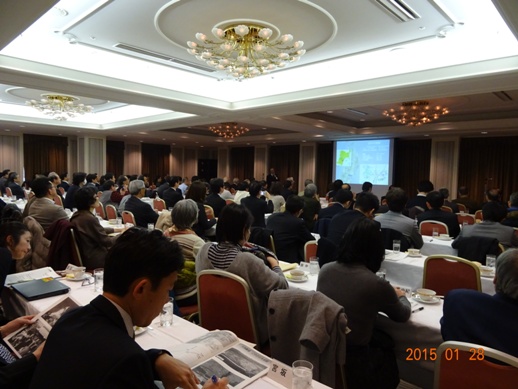 Mr. Isoo Sasaki, the Mayor of Natori City, Miyagi Prefecture, reported on the present progress and future prospects of the disaster recovery on January 28, 2015 in a meeting co-sponsored by OISCA and Keizai Doyukai (Japan Association of Corporate Executives), one of the leading business organizations in Japan.

The meeting held at the Hotel Grand Palace in Tokyo, was attended by about 140 people including top corporate executives who are members of the Keizai Doyukai, government officials, representatives from private corporations and labor unions supporting OISCA and also private individuals.

Natori City with the total populations of 73,229 (at the end of February 2011), was one of the areas which suffered the most devastating damage by the Tsunami in the wake of the Great East Japan Earthquake on March 11, 2011. More than 900 residents lost their lives and a total of 13,852 residential houses were totally or partially destroyed. About 100 hectares of the coastal forest were also wiped out.

Mayor Sasaki whose own house was also badly damaged, explained the details of the city’s recovery plan utilizing easily understandable visual materials. The city’s reconstruction project now under full implementation comprises 3 components: promoting the transfer of the coastal residents to safer inland areas, carrying out land readjustment of the tsunami-hit urban areas and the improvement of Tsunami disaster prevention measures including the restoration of the destroyed seashore forest. He admitted great difficulties in coordinating the sharply conflicting opinions among the residents concerned as to the specific methodology of reconstructing the damaged area, but affirmed that the residents would try their best to rebuild the beloved town. He expressed deep appreciation for the warm support extended to the disaster-affected residents by many people in Japan and all over the world.

In response to a question from the audience as to how the city authorities would provide employment opportunities to the residents, he said: “Before the disaster, the fishing industry was very important, and fish processing plants offered jobs. But they have been destroyed. It is very difficult to create new businesses.” He strongly appealed to the business leaders for investments in Natori.

Afterwards, Mr. Koichi Sasaki, OISCA Field Manager responsible for the day-to-day operations at the Coastal Forest Restoration Project site in Natori, took the floor. He briefed on the activities carried out and achievements made since the Project started in late 2011. In 2014, OISCA and the local farmers helped by hundreds of outside volunteers planted 78,000 seedlings of black pine and indigenous species, mostly raised over the past two years at the OISCA nurseries. The survival rate of the seedlings has been astonishing 98%. Mr. Sasaki cited the exceptionally favorable weather condition as the main contributing factor to the outstanding record. This year, almost the same number of seedlings is expected to be planted at the coastal site.

The Project is aimed at planting 500,000 trees to restore the coastal forest covering 100 hectares in 10 years up to 2020 with a budget of one billion yen entirely raised through donations from private corporations, various organizations and individual supporters in Japan and overseas. 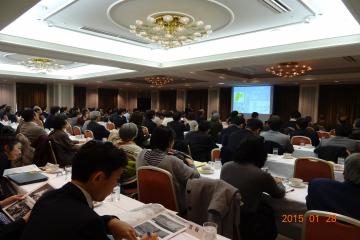 The participants of the event while listening to the presentation of Mayor Sasaki. 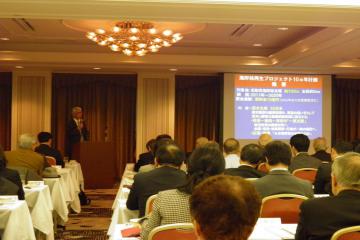 Koichi Sasaki presenting the progress of the project among the participants. 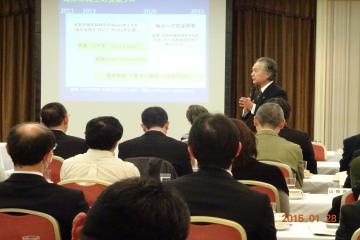 Mayor Sasaki addressing the questions of the participants.
Get Involved