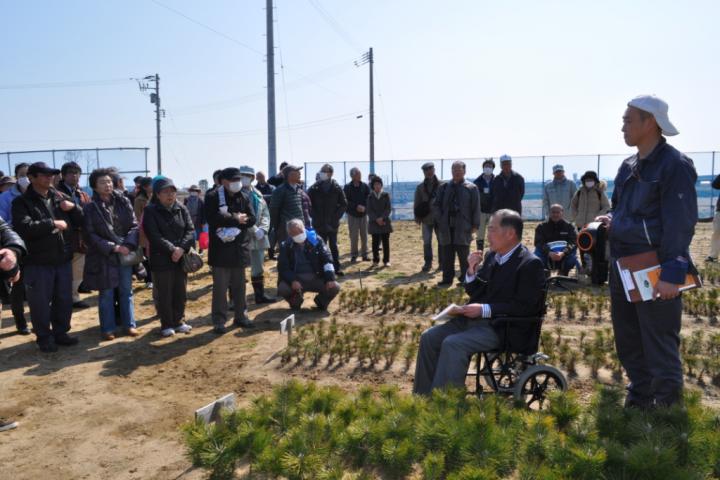 On the occasion of the Third UN Conference on Disaster Risk Reduction (WCDRR) which was held from March 14 to 18 in Sendai, Miyagi Prefecture, one of the areas devastated by the March 11, 2011 earthquake and tsunami disaster, OISCA demonstrated its strong presence by actively sponsoring and participating in a few related events.

On March 15, OISCA organized a group bus tour to visit the site of the 10-year project now underway for restoring the tsunami-destroyed coastal forest in Natori City. A total of 150 people, mostly local residents but also a number of enthusiastic volunteers from other parts of the country, took part in the half day on-site tour. The tour participants first visited the OISCA nursery where black pine and red pine seedlings have been raised for next tree planting. Then, the group moved to the coastal area and walked around the 100-hectare project site where 78,500 seedlings of black pine and other species were planted for the first time in the spring of 2014.

Asked about firsthand impressions of the on-site visit, two young students who came all the way from Kyoto told that it was their first time to set foot on the disaster-hit Tohoku Region and they were deeply impressed by the resilient effort of the local farmers and OISCA trying to restore the lost coastal forest and expressed their strong desire to contribute in one way or another to the recovery work.

In the evening of the same day, the National Land Afforestation Promotion Organizationa organized a symposium on the restoration of coastal forest as one of the WCDRR side events in Sendai City. Mr. Isoo Sasaki, the Mayor of Natori City, delivered a key note speech outlining the present state and future developments of the disaster recovery work including the restoration of seashore forest in his city. Then a panel discussion took place among four seasoned panelists: a high-ranking official from the government’s Forestry Agency, representatives of two NPOs in Iwate Prefecture and Yamagata Prefecture, and Mr. Koichi Sasaki, OISCA Field Manager responsible for the daily operations of the Coastal Forest Restoration Project in Natori City. Mr. Koichi Sasaki briefly reported on the achievements and challenges of the field work carried out since the Project was launched four years ago.

On the morning of March 16, Mr. Hiroyuki Cho, Director for Research and Study, International Cooperation Division, OISCA Headquarters, made a presentation entitled “Long-term strategies for long-term solutions” in the Multi-Stakeholder Segment, other session – Ignite Stage of the WCDRR at the Sendai International Center. He briefed on OISCA’s challenge to restore “Coastal Forest”, “Mangrove”, and “Coral Reef” to protect and sustain the lives of coastal residents by highlighting concrete examples of the projects implemented in different countries including Bangladesh and Fiji. He affirmed that OISCA is the only NGO which has actually been carrying out the unique triple approach.

In the afternoon, it was Mr. Toshimichi Yoshida, Deputy Director of the Division for Domestic Operations who took the floor of a public forum held at Sendai Mediatheque. As OISCA senior staff responsible for the overall operations of the Coastal Forest Restoration Project in Natori City, he explained the background, the present situation and future prospects of the Project which is aimed at planting 500,000 trees on the 100-hectare Natori coastal land in a period of 10 years up to 2020 with the total budget of one billion yen. In late April this year, OISCA and a group of the disaster affected local farmers are planning to plant 50,000 new seedlings at the Project site.

Meanwhile, OISCA won two awards for its outstanding performance in promoting the Coastal Forest Restoration in connection with the disaster recovery work. It received “Good Life Award” from the Minister of the Environment in Tokyo and “Japan Resilience Award” from the Association for Resilience Japan” at a venue of the WCDRR-related activities in Sendai. 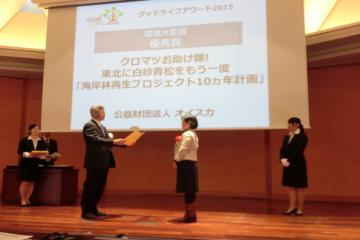 During the ceremony of the “Good Life Award” 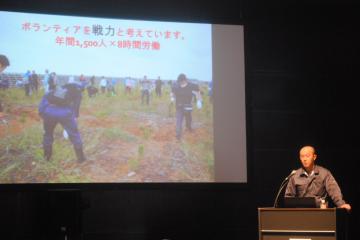 Mr. Toshimichi Yoshida during the public forum held at Sendai 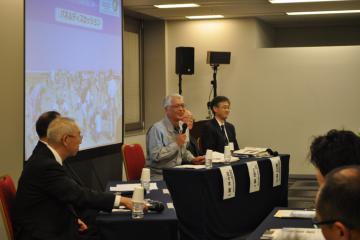 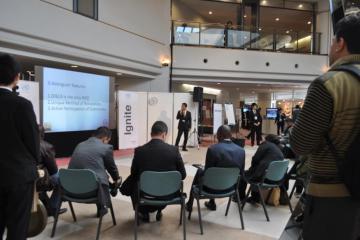 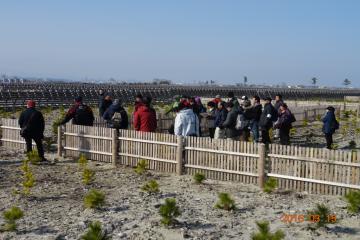 Some of the participants during the organized bus tour 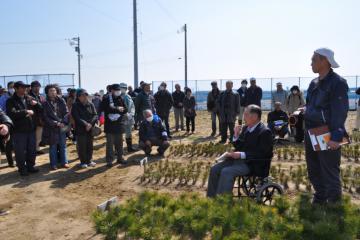 Mr. Suzuki Eiji during the organized bus tour at the project`s nursery
Get Involved