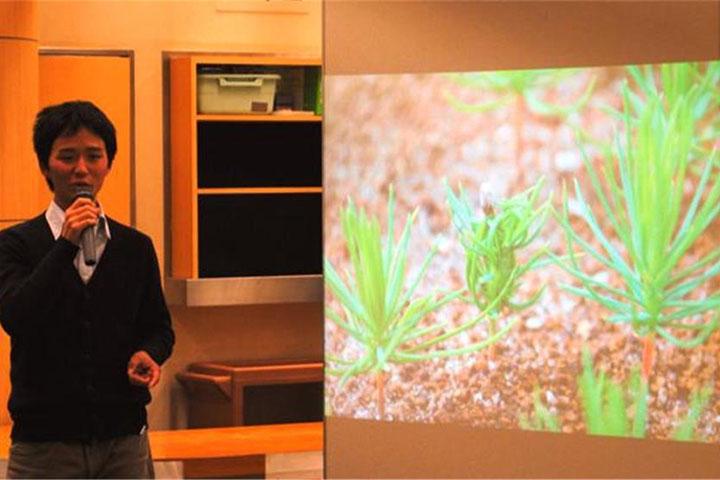 Dec 10, 2012
At a dinner meeting held on December 7 at the Hibiya Green Salon in Tokyo, a young university student made a presentation on his 8-month experience as an OISCA intern at the Coastal Forest Restoration Project site in Natori City, Miyagi Prefecture. The event was attended by some 30 people including OISCA representatives, from supporting private enterprises such as the ANA group companies, Walmart/SEIYU, Fujitsu, Asahi Breweries, Ltd., and individual supporters.

Mr. Kina Akiyama, a 3rd year student of Tsukuba University, located in Tsukuba, Ibaraki Prefecture took a long leave of absence from school and carried out a field internship for the OISCA project in Natori from April through November this year. He admitted that, because he is majoring in politico-economic studies, he was totally unfamiliar with forestry or tree-planting when he first started the field activities. Assisting the OISCA field manager and working together with the disaster-affected local residents actively involved in the project, he participated in the first sowing of black pine seeds in late March and helped periodically spraying insecticides and watering the seedlings at the two nurseries. He vividly recalled that following the seeds sowing, all the people concerned with the field work got quite nervous about whether or not the seeds would bud at all. When the successful budding was discernible several weeks later, everyone was overjoyed. He told that closely working with the local residents in the countryside was a rewarding experience because he was warmly received everywhere and widened his outlook on life.

Mr. Akiyama also had struggles during his internship. He revealed that he encountered some difficulties in acting as a liaison person among the OISCA headquarters, the field manager and the local farmers on the field. Specifically, he observed significant differences of opinions and approaches among the parties concerned.  He concluded his talk saying that in the future, he would like to help the OISCA project again in a different status, probably as a volunteer.

He was asked if he would recommend his classmates and friends to undergo a similar field experience and he clearly affirmed “yes, definitely”. 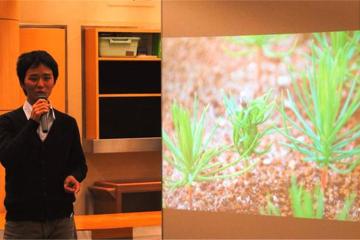