Feb 29, 2012In collaboration with the Foreign Press Center-Japan and Kogakuin University, OISCA organized a whole-day site visit to OISCA`s Coastal Forest Restoration Project in Natori, Miyagi Prefecture on the 29th of February. The tour was organized to seek the support of the foreign correspondents to further promote the Coastal Forest Restoration Project worldwide.

The group tour participated by 23 members of media (news agency, radio, newspaper, TV) from various countries including Bangladesh, Canada, China, France, Italy, Germany, Korea, Singapore, Spain and Vietnam were briefed by Mr. Tadashi Watanabe, Vice Chairman of the Board, OISCA Japan of the general background, organization and roles of OISCA in the project implementation.

As part of the itinerary, the group visited the coastal District of Kitakama in Natori, one of the areas that have been affected by the surging tsunami during the March 11 disaster. “We used to have dense forest here”, said by Mrs. Kazuko Mori while pointing out the areas where she and other residents planted the black pine trees that is unfortunately been withered and washed out by tsunami.

Dr. Seido Kunihiro, OISCA Adviser of Green Technology, explained to the foreign press members the plan of building mounds by dumping chipped woods from the uprooted trees and collected rubble after clearing the damaged area. Dr. Seido emphasized the importance of putting mounds and following proper distance in planting to ensure that the soon to be planted black pine trees under the project will be rooted deeply (vertically) unlike the shallow rooting (horizontal) of the former forest vegetation damaged by the tsunami.

“It is good that OISCA is focusing on the issue of coastal restoration that despite its long term effect is still often been overlooked”, is the positive comment of Mr. Monzurul Huq of Bangladesh Prothom Alo. However, Mr. Philippe Pons of France Le Monde expressed his concern on how OISCA will manage to maneuver the project with its wide scope for a long period of time.

The tour was ended by Secretary-General Nagaishi`s brief speech requesting the foreign members to extend not only financial support but also their positive write-ups for the further promotion of OISCA activities particularly of the Coastal Forest Restoration Project in Miyagi Prefecture.

OISCA will start working on the actual implementation of the project on the beginning of March.

Dr Kunihiro Seido explaining among the foreign press members the importance of making mounds before transplanting the seedlings. 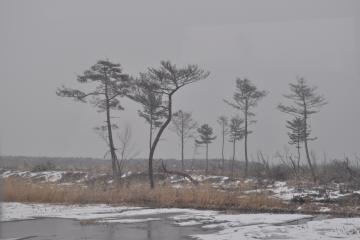 Some of the still standing but gradually withering trees in Kitakama District affected by tsunami. Several meters away from the trees are the collected rubble after area clearing.
Get Involved