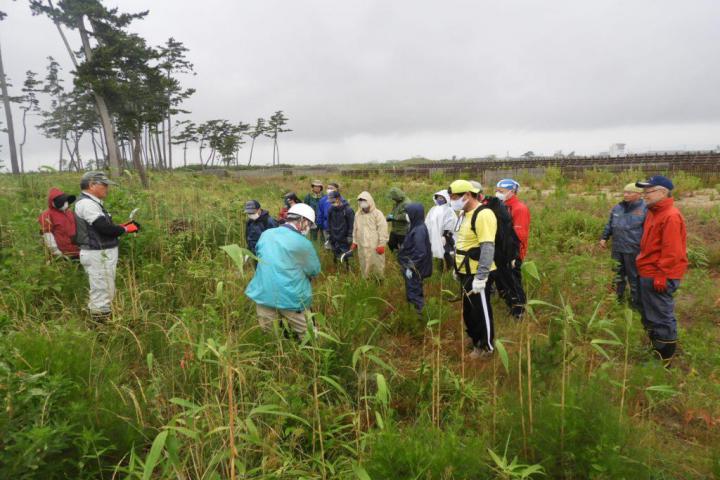 The Corona virus pandemic has seriously affected the onsite operations of many organizations nationwide including OISCA.

On June 19, OISCA carried out the first group activity of volunteers in the 7 months since last November at its Natori Coastal Forest Restoration Project site in Miyagi Prefecture. A total of 20 volunteers and OISCA staff led by Mr. Toshimichi Yoshida, Director, who initiated this project and promoted the subsequent implementation in the past 10 years, participated. In order to prevent the virus infection, the participating volunteers were limited to the residents local Natori and other Tohoku region, and all of them were repeaters.

Unfortunately, it was rainy the whole day long. Despite the constant rain, however, the volunteers braved to get rid of weeds, particularly wisteria vines. The vines grew so much that they covered the whole planted pine trees in some zones. The participants struggled to remove the vines from the pine trees and cut them off.

After lunch at the work office, the volunteers were originally scheduled to continue weeding and engage in additional works such as digging small canals in poorly drained places. But due to the constant rain, the work was stopped, and the volunteers visited different planting sections to observe the growth situation of the trees. They were shocked to come across a large amount of garbage dumped at the corner of the planting site. It is an act of unscrupulous fellows who brought the garbage in the site at night.

The 10-year Coastal Forest Restoration Project (2011-2020) was started following the Great Japan Earthquake which badly destroyed the seashore forest in March 2011. So far, some 370,000 seedlings of black pine and broad-leaved trees were planted over 103.05 hectares area. The last tree planting was finished in November last year. This March the first 10-year plan ended and immediately moved to the second 10-year plan mainly for maintenance work of the planted seedlings such as weeding, clearing and thinning. The total cost of the project including future maintenance work is estimated to be about one billion yen which is entirely raised through donations and grants from Japanese and foreign private companies, organizations and private individuals.